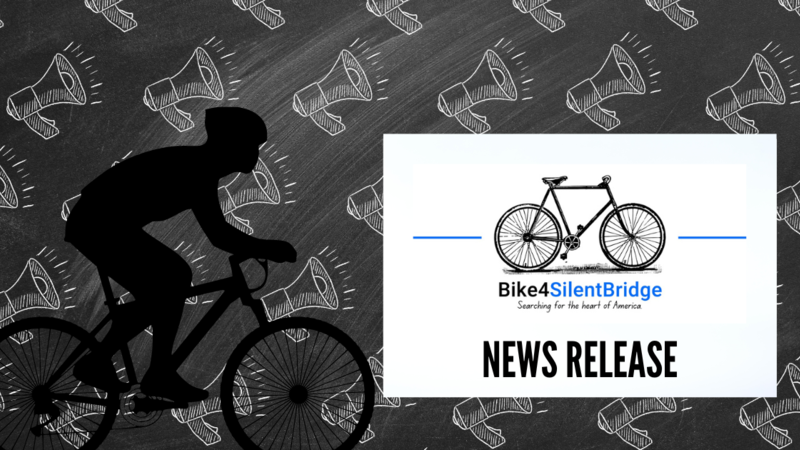 The #Bike4SilentBridge Ride Has Already Biked 4,900 Miles in 13 States

JACKSONVILLE, Fl. – Today, the solo #bike4silentbridge ride entered Florida, the 13th and last state of the nationwide ride raising awareness of human trafficking. Silent Bridge’s supporter, James, decided to self-fund the ride in his retirement to draw attention to human trafficking that subjects 40 million victims to this horrible crime globally. James started in Washington State at the Canadian border and has biked for 98 days over 4,900 miles. He will conclude his ride at the Florida Keys.

James’ bike loaded with 50 lbs. of gear attracts attention along the way, allowing him to have frank conversations in cafes and rest areas about the plight of human trafficking, occurring even in small U.S. towns. He also has met with non-profits fighting trafficking in many of these states, as well as elected officials on the federal and state levels.

“The outpouring of kindness I’ve experienced during the ride has me humbled and feeling hopeful,” said James, who goes only by his first name to keep the ride about the mission and not about him. “If Americans can go out of their way to show kindness to me, a solo bike rider, surely we can unite to say, ‘human trafficking must end, and it must end now.’ As I begin my final state, I reflect on the awareness that has already occurred, the valuable conversations with advocates and I look forward to new opportunities in the Sunshine State.”

James has been keeping a blog at www.bike4silentbridge.com and an active Instagram at www.instagram.com/bike4silentbridge. Media coverage about James’ trip includes a front-page feature story in Kansas’ “Hometown Girard” and TV coverage on NBC’s Local 3 News in Chattanooga, Tenn.

Silent Bridge is a United States-based non-profit that exists to provide recovery and reintegration support for victims of human trafficking and sexual exploitation throughout the world. Our goal is to end this grave injustice against the most vulnerable while working to restore communities and those ravaged by the global human trafficking industry. Since 2019, its efforts in remote areas have included hygiene and nutritional deliveries as well as homes providing shelter, meals and education for sex trafficking victims and their dependents. Learn more at www.silentbridge.org.
###